By continuing to browse this website, you consent to the use of cookies for the purposes of compiling statistical information on visits in order to improve our website and your user experience.

Designed to be 100% reliable for intensive public use, 265 top-of-the-range escalators from CNIM Industrial Systems China have been installed on lines 2, 7, 8 and 13 of the Guangzhou metro since 2008.

The metro of Guangzhou city is proudly considered to be the technical leader in China for its escalators. Looking for top-of-the-range products, the client entrusted CNIM Industrial Systems China with the design, manufacture and maintenance of 55 escalators on lines 2 and 8 in 2008.

Complying with safety requirements for intensive use

The escalators of Guangzhou metro are designed for intensive use, complying with the strictest specifications and every requirement of the most recent safety standards. Their design had to be completely reliable as they carry members of the public, including children and elderly people.

In addition to their safety, reliability and speed, the escalators at Guangzhou metro are extremely robust and were designed to last. Operating 20 hours a day, 365 days a year, they withstand very heavy loads (120 kg per step). Their most durable parts last 20 years.

Running at a speed of 0.75 meters per second, they are able to evacuate passengers from metro platforms between successive trains. They are 1.5 times faster than escalators used in shopping malls which run at 0.5 m/s. They offer very high performance even in their specific category: the average speed in France is 0.65 m/s. 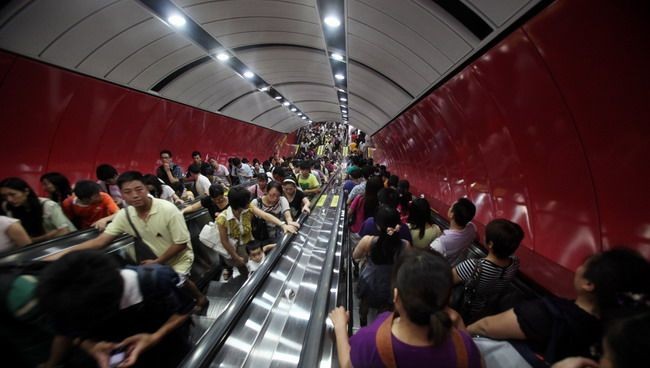